Toneisha Taylor and Amy Earhart initiated White Violence, Black Resistance (found at: https://sites.google.com/site/bkresist/projects) as a collaborative endeavor to digitize and disseminate a variety of primary materials that concern the nexus between racial relations and power in colonial Texas. They contend that the current paradigm of historicizing and preserving materials on racial relations in the United States is rooted in a whitened epistemology that masks the legacy of anti-black violence. By “recovering” and distributing important primary materials, the collaborators can give voices to silenced genealogies of racialized oppression. The founders of White Violence, Black Resistance hope that the project can be used collaboratively as a part of a larger movement to challenge the current dominant order’s racist onto-epistemology.

The project coordinators, Taylor and Earhart, are well-suited for this project because they have backgrounds in interdisciplinary and intersectional work. Taylor, an Assistant Professor of Communication at Prairie View A&M University, centers her academic work on the digital humanities, feminism, and African-American communication. Meanwhile, Earhart, an Associate Professor of English at Texas A&M University, focuses on the digital humanities and literature that is Africana or African-American. Given the relatively low level of maintenance required for the site and the author’s academic interests, it is unclear if the project is funded.

Specifically, Taylor and Earhart utilize this educational opportunity to collect and digitize materials on race from Texas to disrupt the whitened paradigm of exclusion that silences and obscures primary histories of racialized violence. They argue that, “materials about white violence and black resistance [are] found buried in difficult to access rare book rooms, crumbling newspapers, analog and/or transcribed oral histories, and unknown journals” (Earhart and Taylor, “Home”). As a result, it appears that the project is intended to reach student-researchers/digital humanists first, and the mass public second. While the authors would hope that the mass public would seek out projects like these, they recognize that this type of work is primarily an academic interest even though its implications are sociological.

Yet, today, more than ever, it is critical that the authors want to make the narratives told by black subjugated voices more accessible for the public. Currently, racism in the United States largely operates through the paradigm of colorblindness. Many people deny the existence of institutionalized racism on the grounds that formal legal equality exists in many domains of policymaking. While it is questionable that racial legal equality even exists, the narratives told in Washington and in mass media pressrooms reflect this understanding of race. In order to convince people that structural racial injustices still exist, it is important to provide a frame from which to evaluate “legal equality” by explaining the history of racism in the United States. For example, Trayvon Martin did not get shot because of a lack of formal legal protections (even though the court case that followed was clearly not conducted neutrally). He was shot because of the legacy of racism in this country that ties blackness to threat. Thus, the injection of this kind of project’s scholarship and voice into the public sphere necessarily challenges the whitened dominant order by providing the tool necessary for resistance: blackened history.

In terms of spatial organization, the website is easy to use and navigate. There are only four tabs. These tabs are linked to pages labelled “home,” “projects,” “announcements,” and “project coordinators.” The simple layout encourages viewers to gravitate to the tab that would appear to have the most content: projects. The page on projects is also relatively easy to navigate. It hosts a list of links to digitized projects containing primary materials on race in Texas. Each link is complete with a relatively large picture and paragraph-long description. The minimalist design of the website implicitly directs the viewer to heavily invest their affective energies into the projects themselves. The fewer the options that are available for navigation, the more attention people will pay to the pages that are present.

The projects that Taylor and Earhart chose reflect a genealogical approach that attempts to unearth hidden histories of subjugated black people. There are currently only three projects linked to the website. While it would be nice to have more primary materials to investigate, the projects were likely chosen thoughtfully as they help to paint particular narratives about the history of racial relations in Texas. The projects are distinct in nature, providing a comprehensive taste of a contested history.

First, there is a link to the Millican “Riot” project (found at: http://millican.omeka.net/) which historicizes the largest race riot in Texas. Through an archive of newspaper reports, oral histories, geospatial information, census records, and historical documents, those working on the Omeka archive try to capture the riot from a variety of different perspectives and social locations. 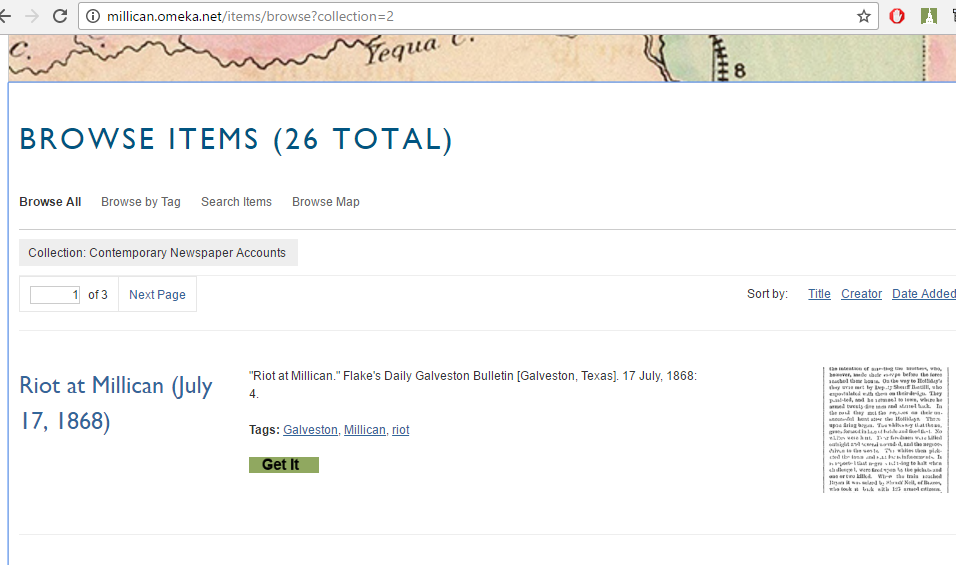 Second, the Alex Haley Malcolm X project displays a little-known essay by Haley and 72 notecards that Haley used in producing The Autobiography of Malcolm X. By focusing on a specific person and their relationship to a revolutionary, Taylor and Earhart link out to a project (found at: http://scholarlyediting.org/2014/editions/intro.haley.html) that addresses a particular account of race. In the process of producing the project, students at Texas A&M University also learned skills necessary in the digital humanities such as markup and transcription. In this way, Taylor and Earhart prop up a project that produced meaningful scholarship in the process itself.

Third, the Prairie View Women’s Oral History Project accumulates oral histories of women and their long-term relationships to Prairie View A&M University, an HBCU. Not only is this project intersectional in its epistemological emancipatory goals, but it was formed as an interdepartmental collaboration between faculty in Communication Studies, Special Collections and Archives, and GIS. Unfortunately, the link provided to the project on Earhart and Taylor’s site no longer works. Nonetheless, by providing a diverse set of projects to investigate, Taylor and Earhart begin to unearth the complexity in the history of racial relations in the United States through their primary materials.

The nature of this compilation is collaborative. By linking to other projects, Earhart and Taylor are actively increasing networks of communication and providing new avenues for access. Instead of simply finding these projects on their respective websites, one can also find them through the proxy that Earhart and Taylor have established. In this sense, the project assists other projects in “linking out.” A quick look at their source code confirms this because it contains a litany of links. The collaborative aspect of this project is critical in analyzing the role it plays in the larger body of digital humanist work on racial relations. Racism is a socially constructed set of relations that operates on a spectrum. As such, it makes sense that efforts to combat racism ought to be rooted in cooperative methods that have projects build off one another.

That being said, this host website does not appear to link out well, nor does it contain a search function on the site itself. It is hosted on google sites, which means that while the website is easy to maintain and use, it is limited in its aesthetic and functional appeal. However, the lack of an exuberant site does not guarantee that the project is unfunded as Earhart has advocated for a pedagogy that emphasizes small-scale projects and localized forms of resistance in the past. It is possible that the project coordinators intentionally chose to present their project in this way. However, given the lack of an independent domain, it is fairly difficult to find the website on popular search engines. For example, permutations of the words in the project’s title did not result in the link appearing on the first page of a google search. Only a direct google search of “white violence black resistance” had the website on the first page of results. This project is thus easy to find if one is searching for it, but it is difficult to stumble across. Moreover, the lack of an in-site search function reduces the accessibility of the catalog, undermining the pedagogical mission of the project. In the future, the collaborators should work on increasing the visibility and searchability of their work.

Overall, while this project is relatively small right now (only three projects are linked), it has the potential to fundamentally challenge the dominant history about white violence and black resistance through a digital genealogy that traces the historical legacy of racialized power relations in Texas. Critically, the value that Taylor and Earhart place in collaboration, black subjectivity, and information dissemination strongly contrasts the logics that produce the conditions of possibility for the exclusion of primary materials on racial relations. These points of departure permeate the entirety of the project from its process to its goals. Given the colorblind nature of racism today, projects like this that unearth dark histories are necessary to explain why even though legal equality exists now, the racist history of the United States has led to structural injustices that still need to be addressed.

Digital Humanities, Literature & Language
This site is part of the HASTAC network on Humanities Commons. Explore other sites on this network or register to build your own.
Terms of ServicePrivacy PolicyGuidelines for Participation