Elizabeth Tammaro, Graduate Student at the University of Central Florida

Histography is one of many digital design projects to come out of the Bezalel Academy of Arts and Design in Jerusalem under the guidance of  Ronel Mor, founder and CEO of design collaboration site DropReview. This project created by interactive designer Matan Stauber demonstrates excellence of design.[1] The project is essentially an epic timeline that spans from the Big Bang until 2015, with each event as a clickable black dot that expands when the user hovers their mouse over it, telling the event name, date, and showing an image bubble. Clicking a specific dot expands it once again, to give the user the option of reading the event’s Wikipedia page. In addition to the informational page, the user also has the option to watch an embedded video from YouTube, or see related events, as in the image below, which shows the “First IMB-PC”. 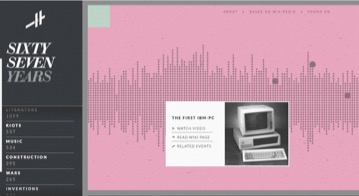 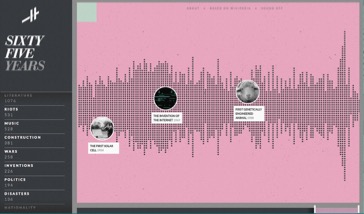 The above image is an example of what this project considers “related events” for the “Invention of the Internet.” These consist of other significant scientific milestones such as the invention of the solar cell and the cloning of Dolly the sheep. A side bar on the left divides events into preset categories such as music, wars, or construction, and along the bottom the parameters of the timeline are customizable. When the user chooses a specific category, such as “Inventions”, the related events feature is still active; however, there are a number of dots that appear more frequently than others. For example, almost any invention that you click on with time parameters set at 1750 to 2015, comes up as connected to “The First Train” and “The First Photograph,” which can be a bit of a stretch for events such as “The Polygraph Invented.” However, the essence of this feature encourages the user to draw connections between events in history and to search for their own relationships through time. What lines might you construct between inventions that are decades apart? As the timeframe is changed, the dots rearrange themselves with satisfying clicking sounds, making the timeline enjoyable to explore just for the sake seeing what you can find. A simple set up, the project provides a basic tutorial when first accessed to ensure that audiences of varying computer skills can fully utilize the tools it provides.

This project features an additional “Editorial Stories” page, seen below, accessed by clicking the unmarked blue square to the left of the main screen. What is shown is a limited selection of event dots, designed in a spiral timeline of history that allows the user to scroll through the centuries of time. This invites the user to view history as a spiral of progress, a series of events which are linked together through cause and effect.

The source of the event dots are Wikipedia pages, a site that has drawn some skepticism from historians. A wiki by definition is an article created by a community in which all members of that community can edit the text, and that text can be hyperlinked to other wiki pages that are relevant, thus reliability can be in question. Students are discouraged to cite it as a research source, while on the other hand it makes for a great research diving board. In a 2012 article published by the American Historical Association website, Wikipedia is referred to as “the most prominent public history project in the world.”[2] The article argues that the digital encyclopedia allows for open access history that historians should be contributing to, rather than condemning for inaccuracy. One way in which to do this is through hackathons, which bring together programmers and their ideas for drawing attention to the gaps in digital presence and presentation of minority groups.[3] For instance, the campaign Art+Feminism holds an international hackathon specifically for Wikipedia in which they edit articles to be more female oriented.[4] According to a Wikipedia Editors Study, 91% of Wikipedia editors are male, and while the study devotes an entire section to the growth of women in the program, there is no such section for other minorities.[5]

The increasing contributions of historians and minority hackathons to Wikipedia would only benefit this project, as the lack of minority perspective could be a drawback in the eyes of the historian. Histography takes the articles of Wikipedia and makes them slick and stylish, and even adds videos and their own relevant hyperlinks. However, it is still up to the user to remember that while the articles look highly professional in this project, what the nature of that original source is, which the site clearly states. With more hackathons tackling Wikipedia pages and bringing further validation, this digital project will increase its contribution to the field of history. The site perhaps would excel as a starting foundation for research or exploration especially in the classroom, as it serves as a way to view an expansive encyclopedia in an interactive and enjoyable form. If any feature were needed for this project, it would be a search bar or a “Previously Viewed” feature, because it is difficult to look for any specific event or even to return to one you looked at before. Any visitor to the site, professionally designed with no obstructive technical issues other than lack of support for the Microsoft Edge web browser, is able to immerse themselves in the long and complex timeline of history, simplified and enjoyable.

Digital Humanities, History
This site is part of the HASTAC network on Humanities Commons. Explore other sites on this network or register to build your own.
Terms of ServicePrivacy PolicyGuidelines for Participation