Conference Report: The 2017 Grace Hopper Celebration of Women in Computing

I’m filing this conference report from the annual Grace Hopper Celebration of Women in Computing, which just wrapped in Orlando, Florida. The conference is a project of Anita B.org, which has been a community for women in computing since 1987. According to the GHC conference website, it’s the largest gathering of women in computing in the world; this year, it sold out within hours, and they estimate over 18,000 attendees were on site. As the name suggests, it skews towards computing (and women), so it’s a great fit for HASTAC folks who identify as women and are interested in a few days of being steeped in academic and industry tech.

As a speaker and as an attendee, I found Grace Hopper a worthwhile networking and informational experience. Though the fee is not small ($350), the conference offers a competitive Grace Hopper Scholars program, which this year awarded over 600 travel and conference sponsorships to students. I was able to attend the conference thanks to this generous initiative. 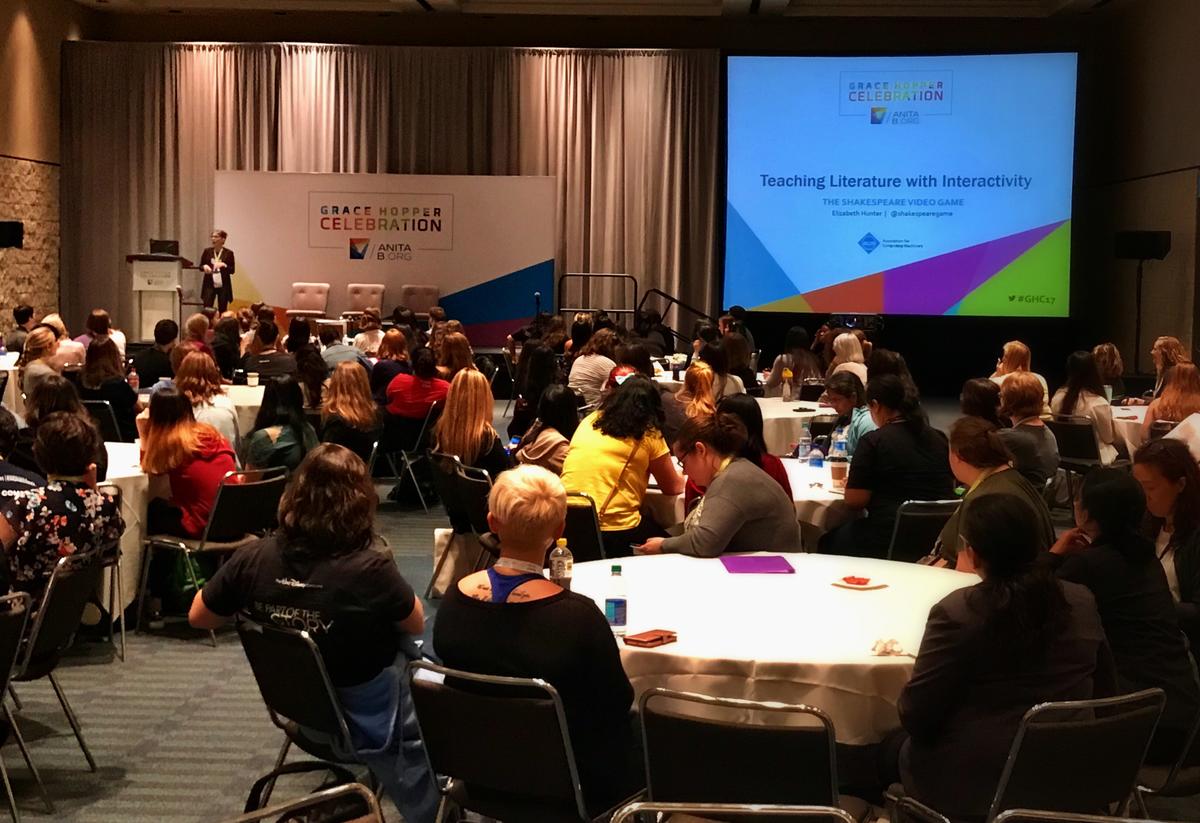 My presentation on Something Wicked, my Shakespeare video game, was part of one of the conference’s 260 sessions over three days. My panel was in the Interactive Media track, and my fellow panelists were Sara DeWitt, VP of PBS Kids Digital, who talked about her team’s work on games as an alternative to standardized tests for assessing early childhood learning, and Erin Ramos, Effects Animator at Disney, who was in charge of water animations for Moana. Or, as she put it, “the water’s performance.”

In addition to its speaker sessions, Grace Hopper is also known for its career fair. Over 300 tech industry employers and universities are on site to talk to applicants, and many companies interview and make hires from the undergraduate contingent before the conference is over. Though that side of Grace Hopper didn’t really apply to me, I left the hall with enough branded swag to check a bag on my return flight. And as a proud Wildcat currently on the academic job market, I stopped by the Northwestern booth for a photo op. 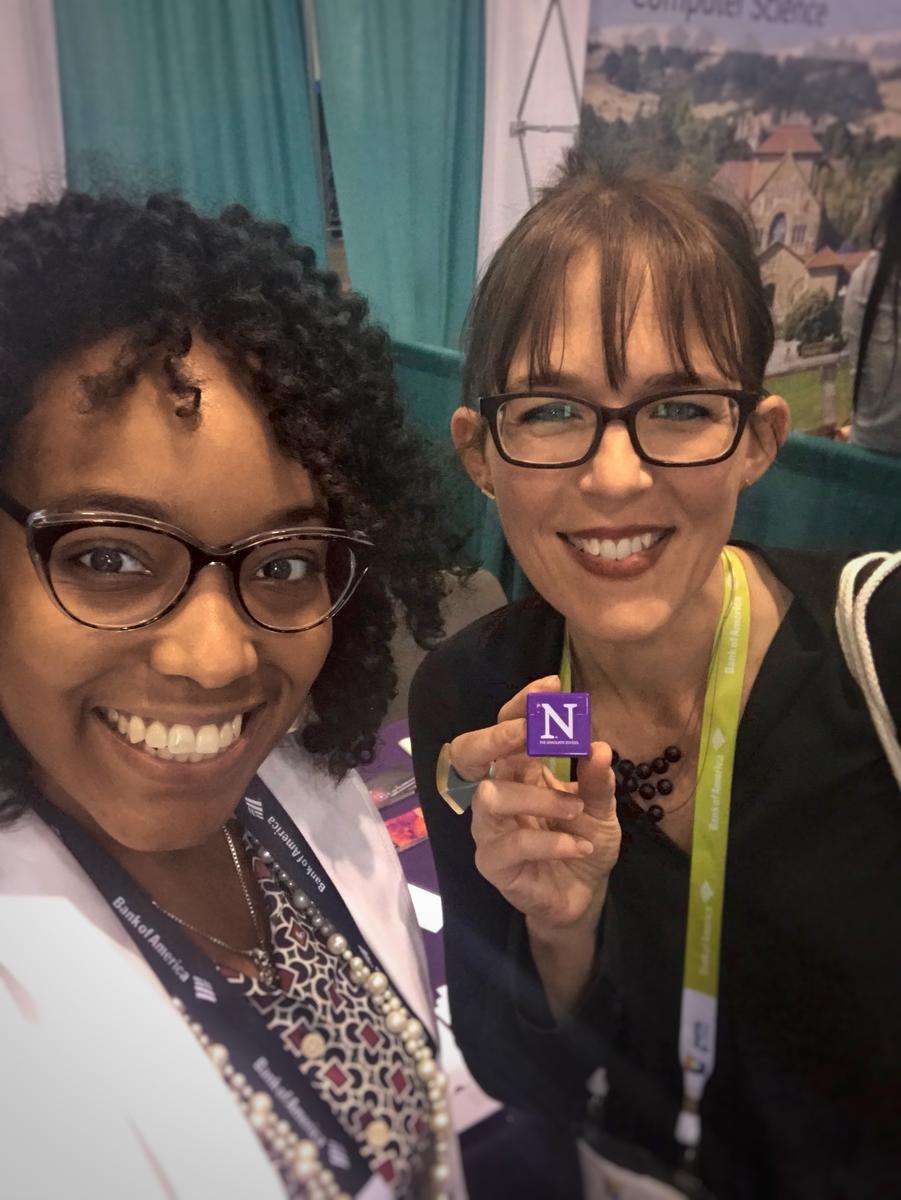 I also sat in on presentations like “Making Live Action 360 Video Accessible and Interactive,” from Google Innovation Strategy Lead Alexis Cox, who demo-ed Google’s VR film, Tabel. Cox’s co-panelist, Christina Bangah, is the director of PricewaterhouseCoopers’ Technology, Media, and Telecommunications practice, and she gave a presentation on “Media Disrupted: Gaming, Television, Music, and Virtual Reality Trends.” Takeaways from her presentation were (1) PwC has VR media growing at 77% year over year (77%!), (2) they project a 22% growth in e-sports over the next five years, and (3) while traditional media revolves around content and distribution, emerging media revolves around fans. According to her slide, PwC considers emerging media as AR, VR, blockchain, AI, 3D printing, drones, the Internet of Things, and something in a light green font I couldn’t read from the back of the ballroom, and that she said too fast for me to transcribe. I think we can all agree it was probably “immersive live theatre,” which is the subject of my dissertation. What a coincidence!

Side note: she didn’t elaborate on how blockchain counts as emerging media. If you’ve got a vision for how that would work, please enlighten me in the comments.

I also joined an inclusive design workshop led by three women who work on design inclusivity and accessibility for one of the country’s biggest tech companies. Though questions of inclusivity and diversity are of course broader than vision impairment and an aging population, that’s what the workshop focused on for the most part. In the presentation that preceded the hands-on “empathy map” we made at our tables, the workshop leaders noted three reasons tech corporations should care about inclusive design: 1) “Diversity,” because a diverse workforce works harder and is more creative, 2) “Economic,” because the aging population is a valuable and untapped market, and 3) “Humanitarian,” because it’s the right thing to do.

The hands-on activity that followed their presentation was designed to promote a better understanding of a product’s potential user groups. To achieve empathy for an elderly user, workshop attendees were asked to take a selfie and post it online while wearing either a sock over their dominant hand, or the goggles set on each table, which simulated different visual maladies. I was reminded of Scott Magelssen’s Simming, wherein he discovers that corporate age-simulation workshops do less to foster productive empathy than they do to reinforce young participants’ aversion to the concept of aging and their resolve to live a healthier lifestyle. 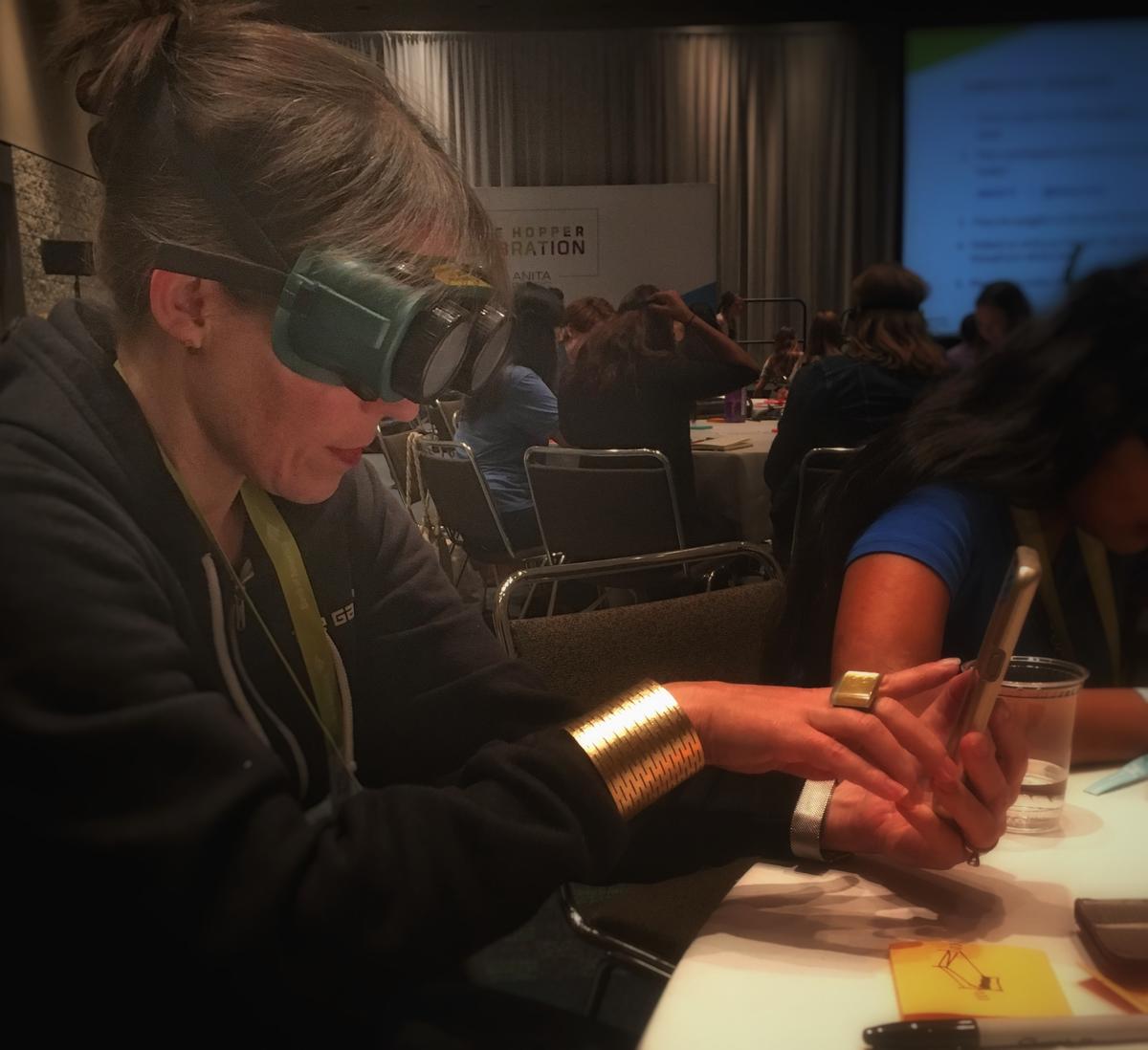 Among the more worrisome assumptions underlying the workshop were that aging is by definition a disability, and that young, not-disabled people are exclusively in control of design. So while I appreciated the workshop and the resource they offered on accessibility, I found it revealing that “hiring people from the demographics in question” was not among the many solutions this company offers for improving design inclusivity and accessibility—particularly at a conference whose mission revolves around “envision[ing] a future where the people who imagine and build technology mirror the people and societies for whom they build it.” Though I noted this inconsistency on the Post-Its empathy map each table assembled, the short Q&A window closed before I could raise my concern more publicly. Fortunately, the woman who did get to ask a question raised other valid concerns. She was from Uganda, and she asked why the company’s version of inclusive design did not include making products legible to, as she noted, the world’s one billion non-dominant language speakers. There is much work to be done in this area.

Despite my humanist’s skepticism of what sometimes veered into unchecked tech euphoria—are ubiquitous wearable devices actually intended to improve workplace safety, or are they the next Panopticon? Are we sure “VR is the first medium to be rooted in our humanity”?—even I got giddy over one particular digital tool: Google’s Tiltbrush. In a VR environment, Tiltbrush allows the user to paint at room scale, with any number of digitally rendered substances—stars, fire, water… I’m more interested in the expansiveness of AR and MR than in the enclosure of VR, but the freedom to paint at scale with digital fire is thrilling. Here’s hoping my lab at Northwestern can get our collective hands on Tiltbrush and make it work in MR for Bitter Wind, the adaptation of Aeschylus’ Agamemnon we’re building for the Microsoft HoloLens. We have a lot of red tapestry to render.

Digital Humanities, Performing Arts, Video & Animation
This site is part of the HASTAC network on Humanities Commons. Explore other sites on this network or register to build your own.
Terms of ServicePrivacy PolicyGuidelines for Participation