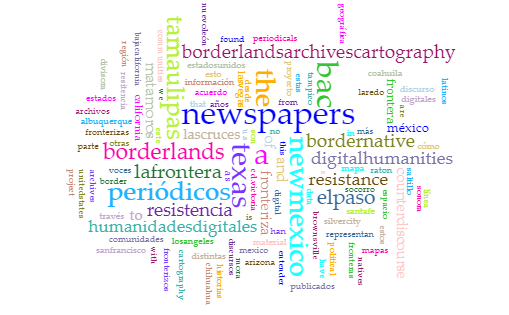 The current, constant, and aggressive political rhetoric towards the geographic, ideological, and metaphorical U.S.-Mexico border, as a threat, led to the construction of a counter discourse. As border natives, we understand the borderland as a space where diverse cultures co-exist under strong political, economic, and social hegemonies; as well as, a space where regions influenced each other, but maintain their own identities. Borderlands Archives Cartography (BAC) is a digital humanities project that emerges as a resistance to political discourses that impose stereotypes against immigrants, Mexican citizens, Latinos, among others, which have great repercussion on borderlands communities since these representations forcefully become part of border natives’ identities. Furthermore, this type of discourses have an effect in the local, national and worldwide view.

Therefore, the objective of BAC is to gather periodicals archives from both sides of the border in order to understand the region and its communities before and after it became a division line. This project takes a digital humanities platform to expand the notion of borders, methodologies, and data analysis with the purpose to facilitate the access to the material and promote interdisciplinary research. With the use of a geo-analysis tool, BAC’s digital map displays the geographical location of U.S.-Mexico border nineteenth and mid-twentieth century newspapers. The selection of newspapers from both sides of the border followed BAC’s protocols, in which the year of publication dictated the cities, counties, states, and regions to be considered as part of the borderlands. The data is catalogued following the Library of Congress standards. The newspapers come from various archives in the United States and Mexico. 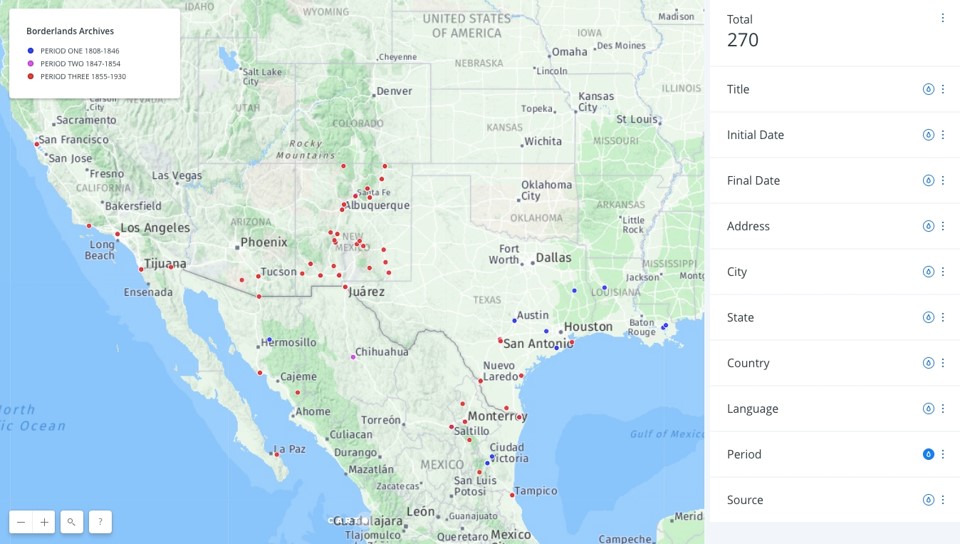 As border natives and Research Fellows at the Recovering the U.S. Hispanic Literary Heritage we were exposed to a database with more than a thousand recovered newspapers. This led us to a series of questions regarding the periodicals not only from the U.S. border, but the material found in archives along the Mexico northern region as well. Under this archival consciousness we found periodicals that reflected the local, and national histories, cultures, and literary legacy from the U.S.-Mexico borderlands.

Presently, BAC considers nineteenth century newspapers from the entire states, and the twentieth century periodicals are selected based on border cities from both sides. This is due to the fact that the border went over a geographical and political transition that established what the current division line is now. With this in mind, the periodicals found in BAC are categorized in one of the three historical periods, according to the year published, in order to provide an understanding of the region:

The project focuses on periodicals to include multiple voices that represent the borderlands communities. BAC’s archival content challenges the political rhetoric by the white-colonial gaze that excludes individuals inhabiting the border regions that have been practicing literary production and self-documentation from colonial times to the present. In the borderlands, cultural interactions gave rise to new identities as a result of the loss of territory, immigrations, exile, and deterritorialization, which are documented in newspapers. For instance, periodicals, kept individuals informed about their rights to fight against segregation and discrimination, particularly after the cession of the borderlands to the United States in 1848 (Kanellos and Martell 2000, 7-8).

BAC as a digital humanities project promotes the use of diverse knowledge since different skills are essential for visualization, engagement, interaction, research and most importantly, understanding of the borderlands histories. As Roopika Risam (2014) emphasizes, these types of texts can aid in the theorizing of digital archival practices. In the case of BAC, the integration of these periodical resulted as the first U.S.-Mexico borderlands newspapers digital archive. The project has a repository platform, Bacartography.org, that displays the digital map, historical context of the borderlands, online resources, publications, a monthly newspapers exhibition, among other information.

More than a project, Borderlands Archives Cartography (BAC) is a personal commitment to the borderlands communities. As border natives, we want to bring this written legacy to our communities through BAC because just as we found ourselves represented and empowered by the recovered material, others can have the opportunity as well. With this in mind, BAC strives to continue uncovering voices from the past to destabilize statism. 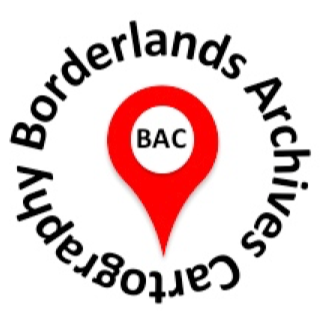 Digital Humanities, Geography & Mapping, History
This site is part of the HASTAC network on Humanities Commons. Explore other sites on this network or register to build your own.
Terms of ServicePrivacy PolicyGuidelines for Participation