As we get ready to host the HASTAC 2023 Conference “Critical Making and Social Justice” at Pratt Institute, we want to give the HASTAC community a behind-the-scenes look at how we designed the conference logo. The conference theme invites us to consider how things are made, the processes and social embeddedness of our work, and how we teach those processes to and with others

In this post, Shubhangi Singh, a graduate student in the MS Program in Information Experience Design at Pratt Institute, explains the thinking and process that went into her design of the visual identity for the conference.

We hope this post helps to make our own conference planning process more transparent and introduces design approaches to the HASTAC community. We also hope it expresses and embodies our values and ambitions for the conference, which will be further described in the full CFP available in May 2022.

The identity of a conference is much like that of an individual; it is dynamic, impactful, and representative of the ethos. The process of creating the visual identity of HASTAC 2023 “Critical Making and Social Justice” seemed like getting to know someone and seeking to communicate the intrinsic values shaping their journey to others.

Before I start uncovering the design process I would like to thank the HASTAC organization members and Pratt’s program committee for their valuable feedback and constructive suggestions. I would also like to thank Professor Chris Alen Sula and Professor Nancy Smith for their guidance, encouragement, and helpful critiques throughout the project. 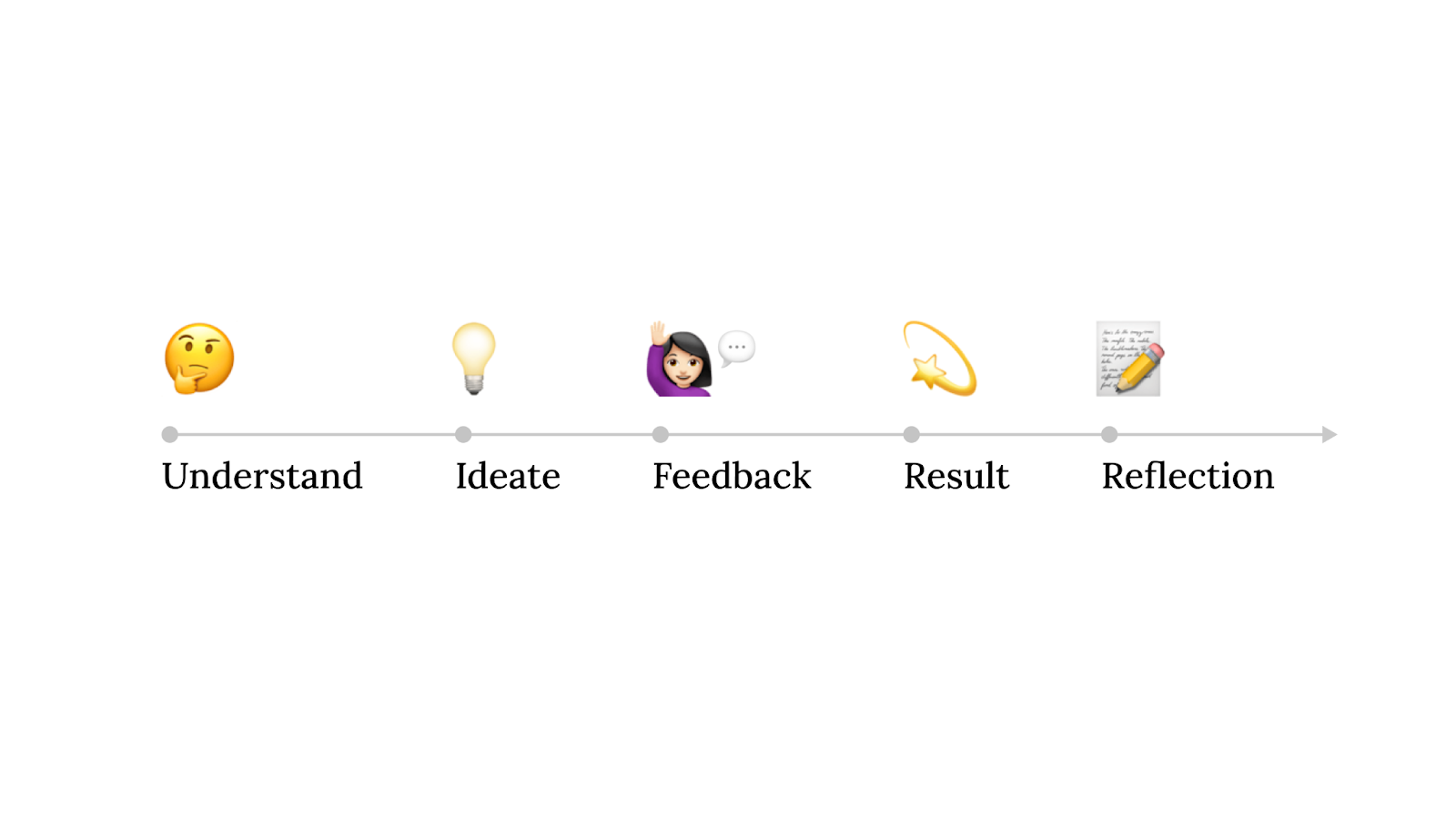 The design process for creating the visual identity

The first step of the design process was to understand who was I designing for, who was the audience, what was the context and how would the designs be used. What aided in the quest for these answers was the conference brief and the various themes encapsulated in the developing call for papers. A few of the themes that resonated with me were:

Additionally, an in-depth survey was conducted by Prachi Chhajed, a graduate student in the MS Program in Information Experience Design at Pratt Institute to learn more about what the conference meant to Pratt’s program committee. This was really insightful as the respondents described what the theme conveyed to them, their visual preferences, and the ideas they associated the upcoming conference with.

The next step in the process was to brainstorm and come up with visual representations of the various ideas and themes discovered in the earlier stage. I find it really useful to sketch out my ideas in this stage, as it allows me to experiment with multiple concepts rapidly and test their effectiveness. 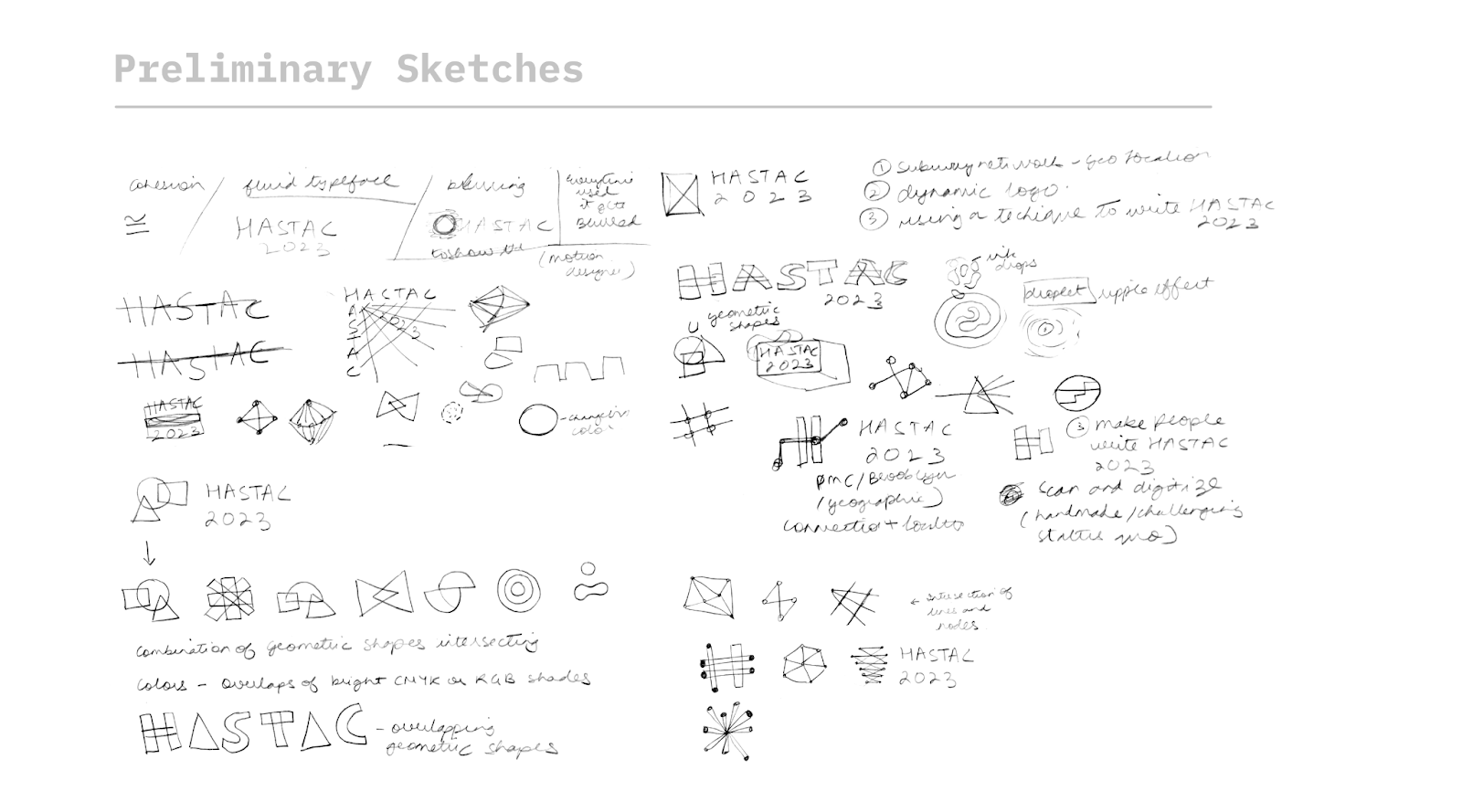 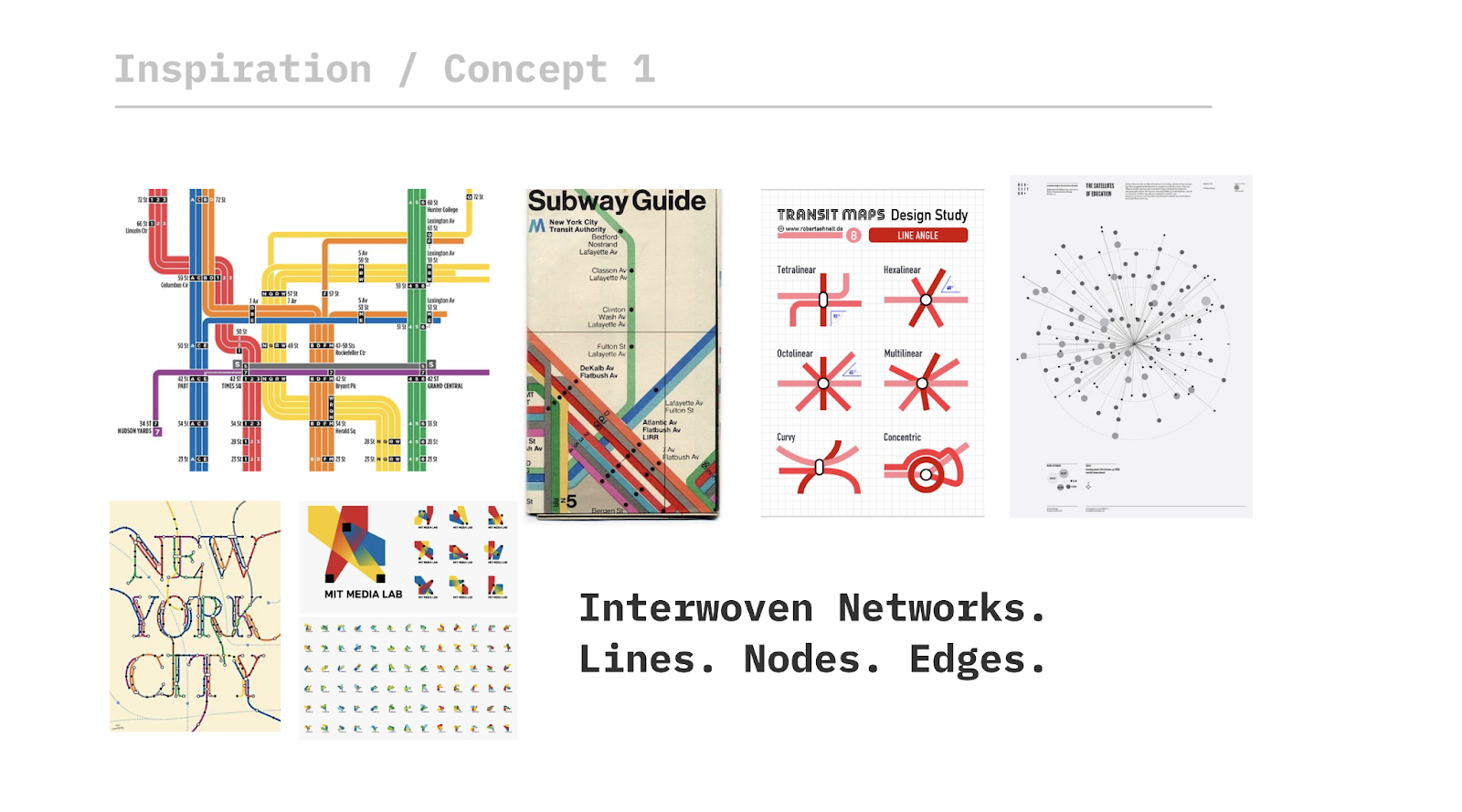 The first concept was inspired by the geographic location of the conference i.e New York. One of the defining features of the city is the Subway transit system. It is its lifeline and brings people from all walks of life together for their daily commute much like the conference where academics from diverse fields come together to create a shared vision of the future of digital technology.

Also, even though the subway system might seem complex but at its core, it is essentially a network that can be simplified into its elemental units i.e the nodes and edges. The logo explorations show the evolution of a simple network consisting of three nodes into a more enriched, colorful, and inclusive form through the addition of nodes.

The various logo forms were also created to represent the idea of morphosis and a dynamic visual identity that is ever-evolving. The inspiration behind this was the dynamic visual identity created for MIT media Lab by Brooklyn-based designers E. Roon Kang and Richard The. The logo was created by a custom algorithm that could be organized in 40,000 permutations. Although this logo has since then been redesigned it was truly iconic.

The colors in exploration 1.1-1.4 are inspired by Massimo Vignelli -style representations of the transit system. Here is an article on How Vignelli’s style still inspires the subway maps today by Allen Hillery (https://medium.com/nightingale/how-vignellis-design-still-influences-nyc-s-subway-maps-today-63159e8845c9) 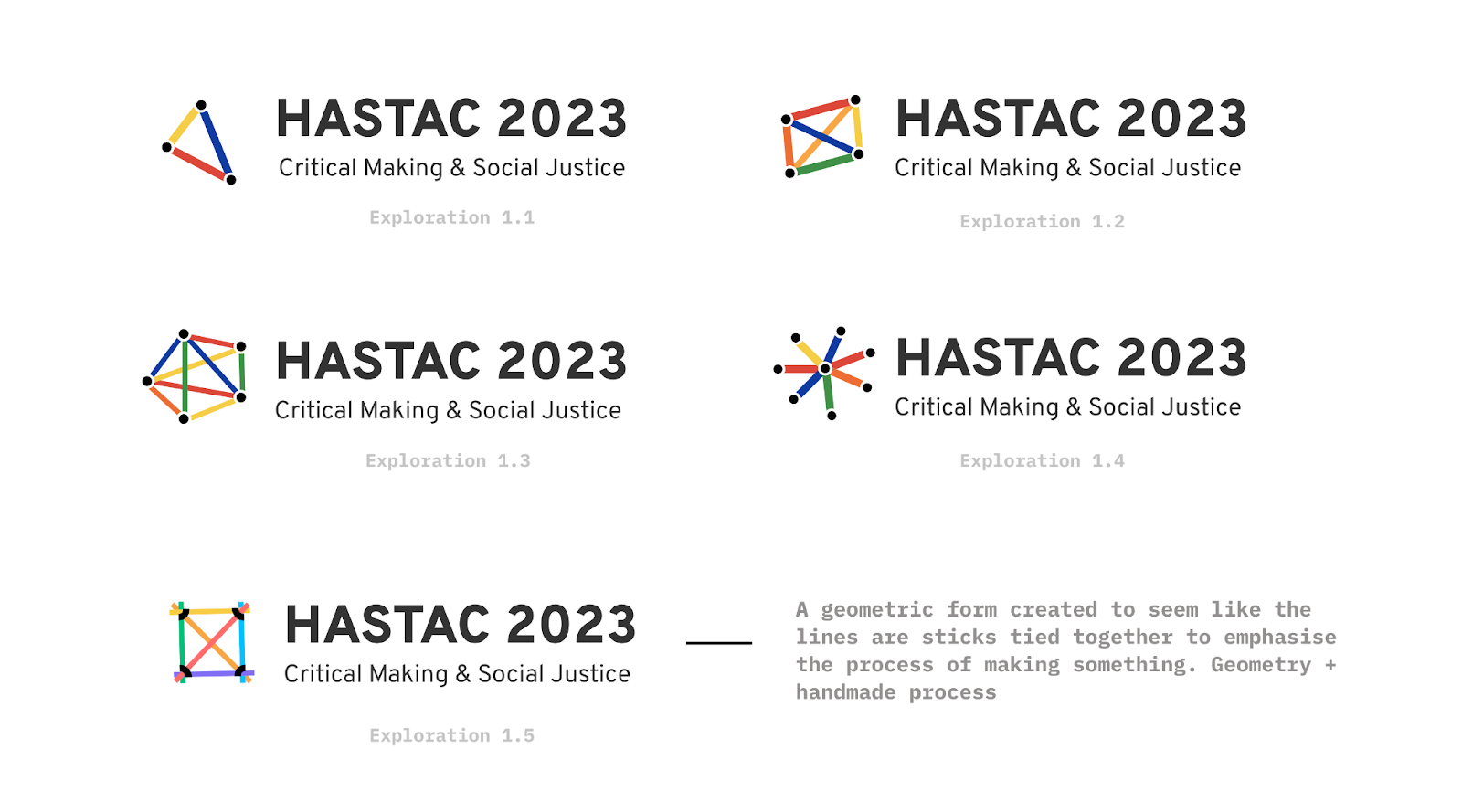 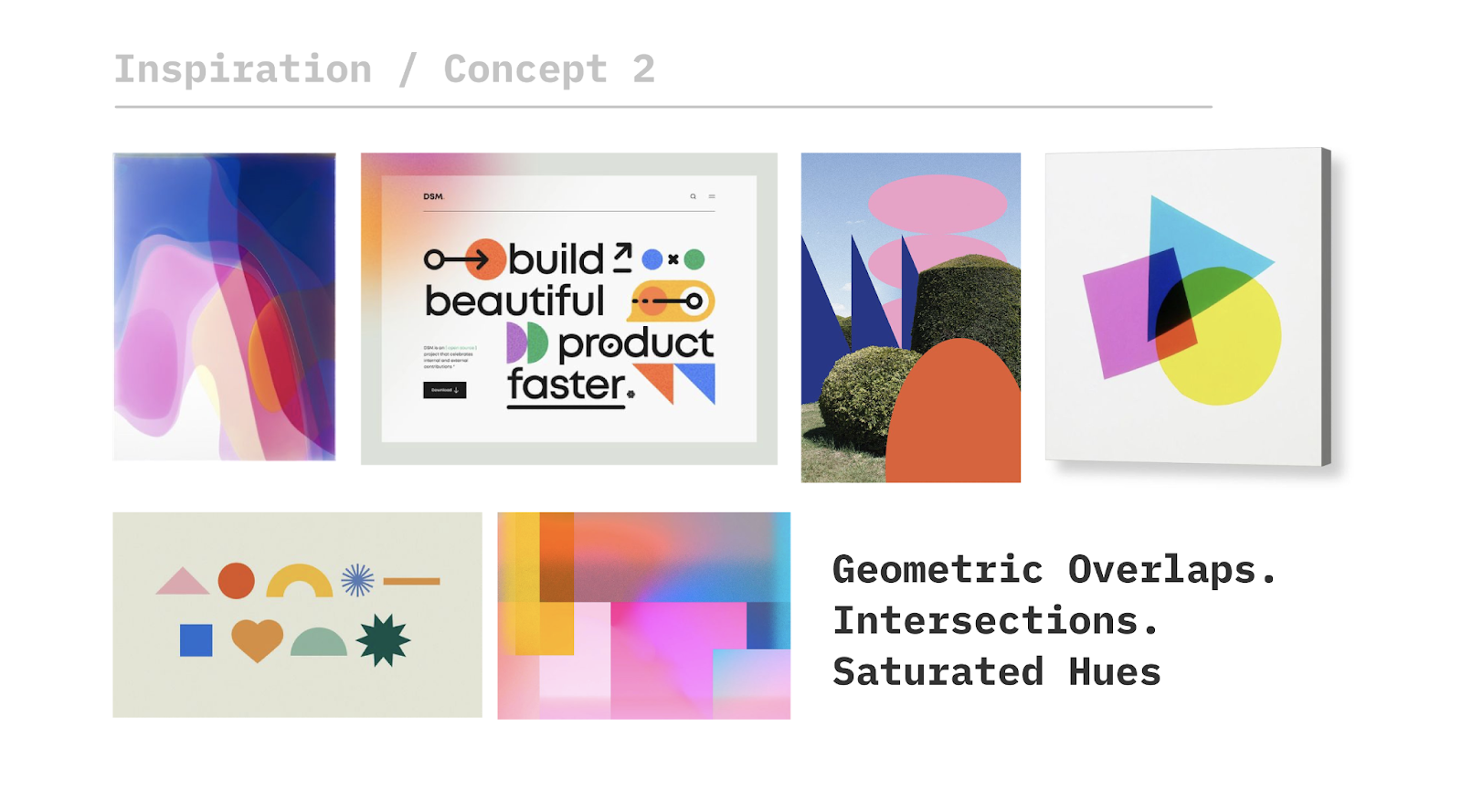 The second concept used geometric shapes and saturated hues to create overlaps that represented the intersection of ideas, disciplines, and people in the HASTAC conference. Primary geometric shapes were used as building blocks to create complex geometric forms to show humanistic values like progress, optimism, cohesion, and multidimensionality. The colors were vibrant and transparency was used to show the underlying layers. 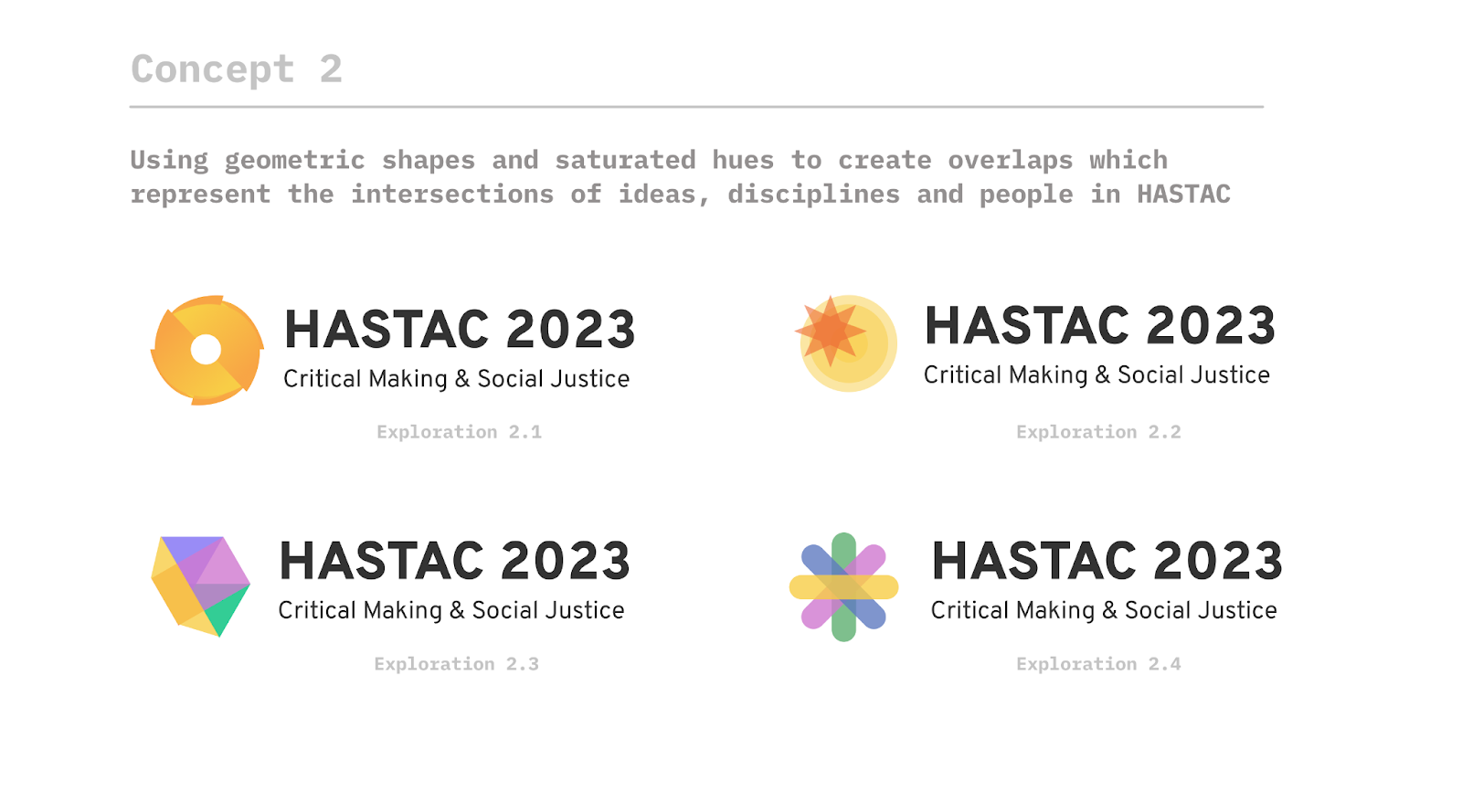 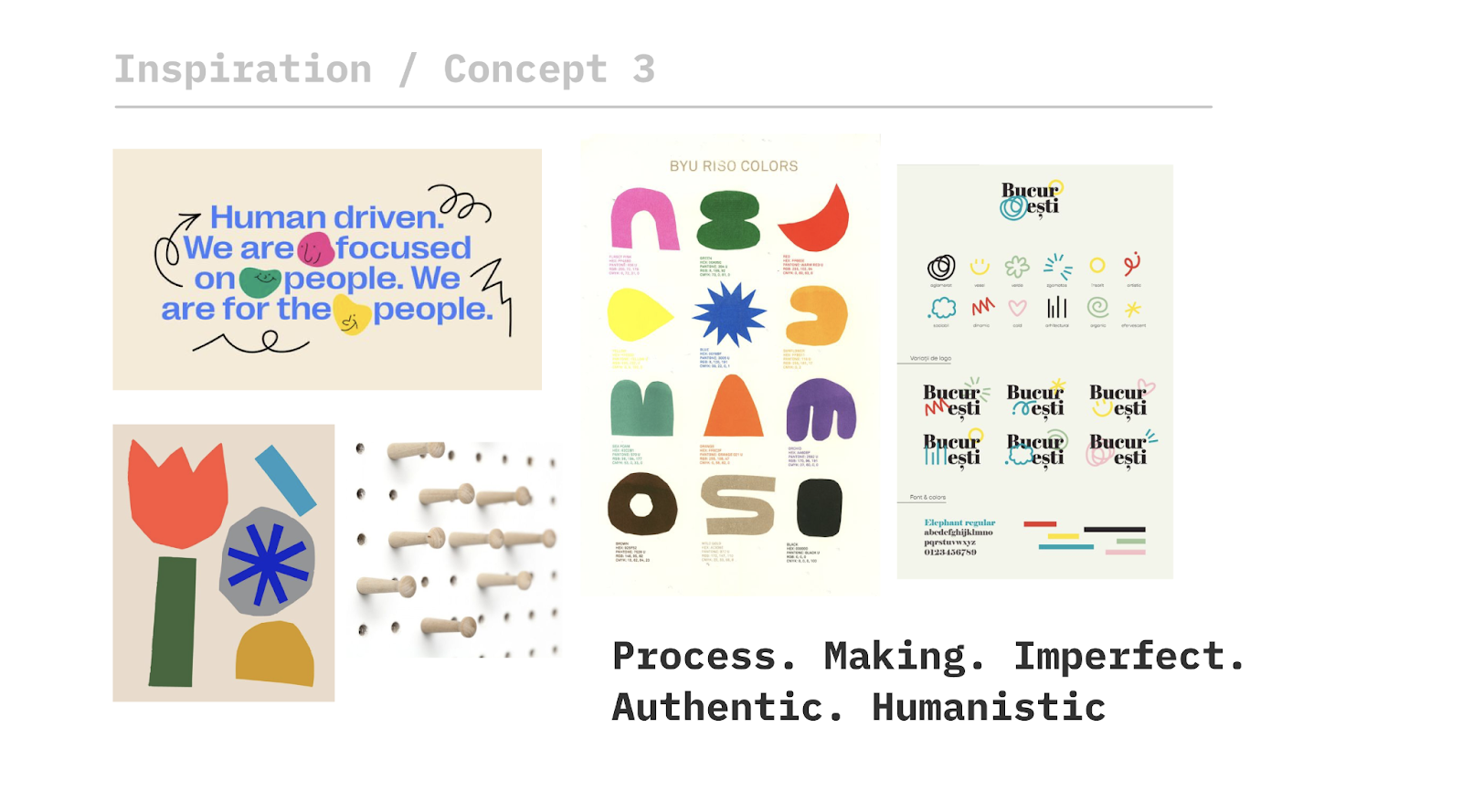 The third concept emphasized the process & method of creation. Handmade imperfections are accepted (and welcomed) as a part of the design, instead of a polished flawless form. The shapes have more character, are unique, and are handmade to bridge the gap between humans and technology.

While designing explorations for this concept I came across a google font called “Palette Mosaic”. A part of the Shibuya Art project it was created from primitive shapes by handicapped artists in collaboration with design students. I decided to use this typeface in vibrant colors (Fig 3.1) as its story was very inspiring and represented the spirit of the conference.

Another source of inspiration for this concept was a bit unexpected but very relevant to the essence of creating something. It was a pegboard and the idea of modifying the same object in multiple ways to solve various purposes. An interpretation of this was to imagine letterforms created by wrapping yarns to evoke a low-tech appeal (Fig 3.2) 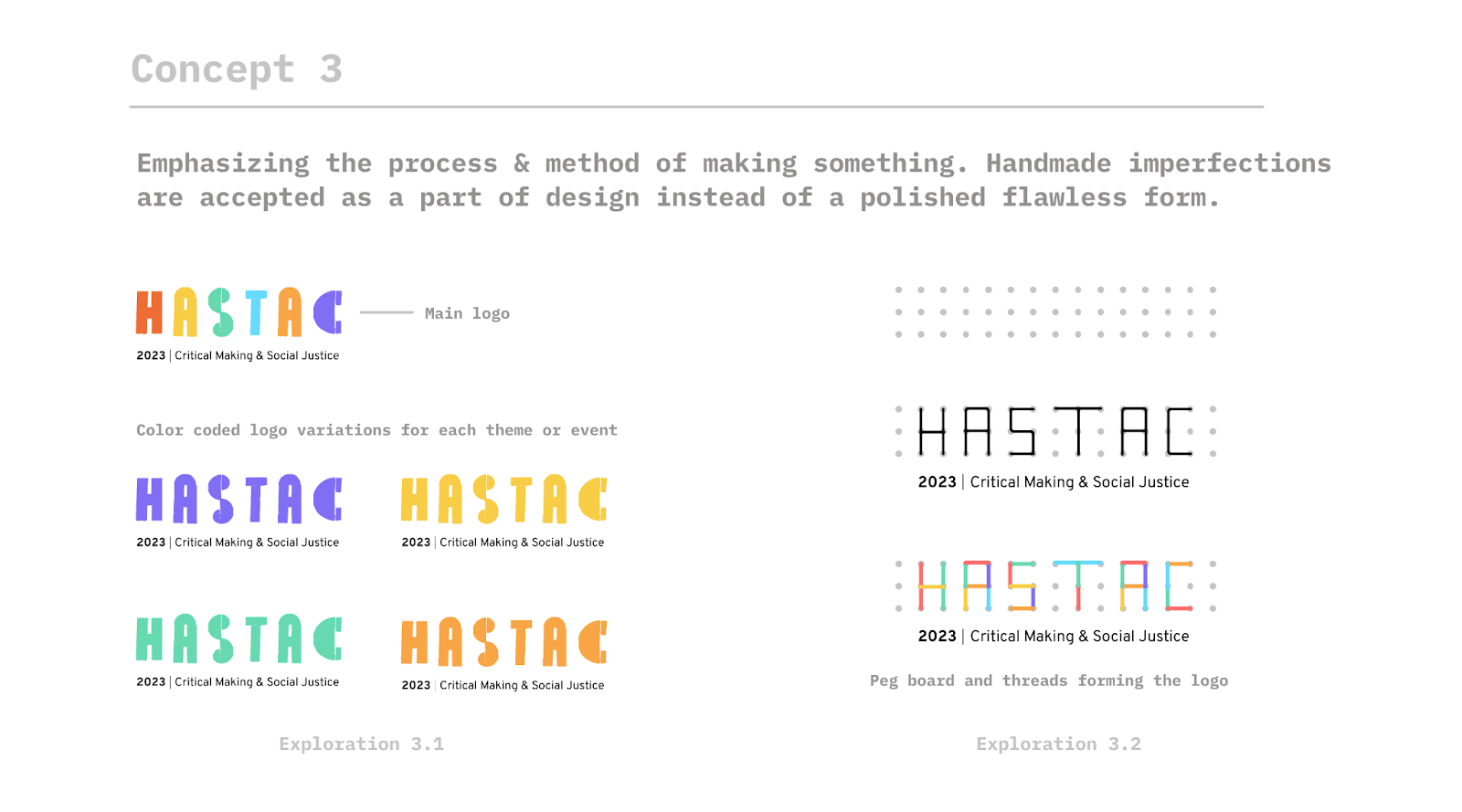 The three concepts were presented to HASTAC organization members and Pratt’s program committee. Our discussion focused on the salience of each idea and which concepts best represented the conference theme for 2023. The highlights of the discussion were:

Concept 3 was the most liked, as it brought out the physicality of objects and was closely connected with the theme of Critical Making. It also seemed to be both modern as well as nostalgic and could represent the interconnection behind the various ideas, themes, and people.

After all the explorations and discussions, it was now the time to narrow down and focus on one concept that could be fully fleshed out. As per the feedback received from both the groups a concept that was really liked was the idea of creating letterforms by hand using lines to evoke a low-tech appeal. Its high fidelity version was created (Fig 3.2).

In order to create the final logo, a skeletal structure of various letters was made using nodes. After that, the interconnecting lines were created using the same stroke, similar to how a thread is wrapped around a point and remains unbroken. Each letter of the logotype was made manually thus ensuring that the logo would be unique and would also have its set of imperfections that comes with hand-drawn objects.

Here is an accelerated process video of creating the first letter: 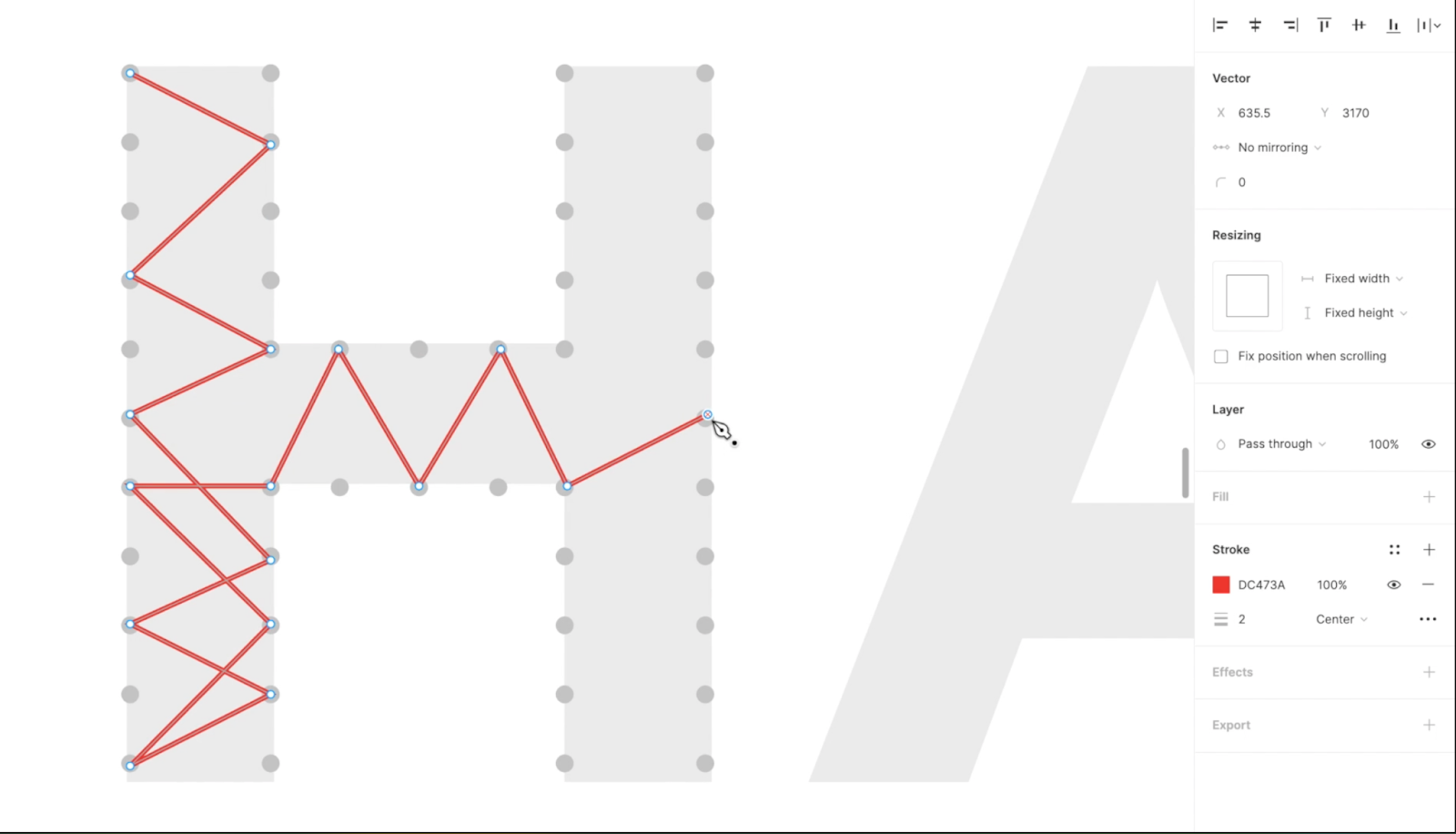 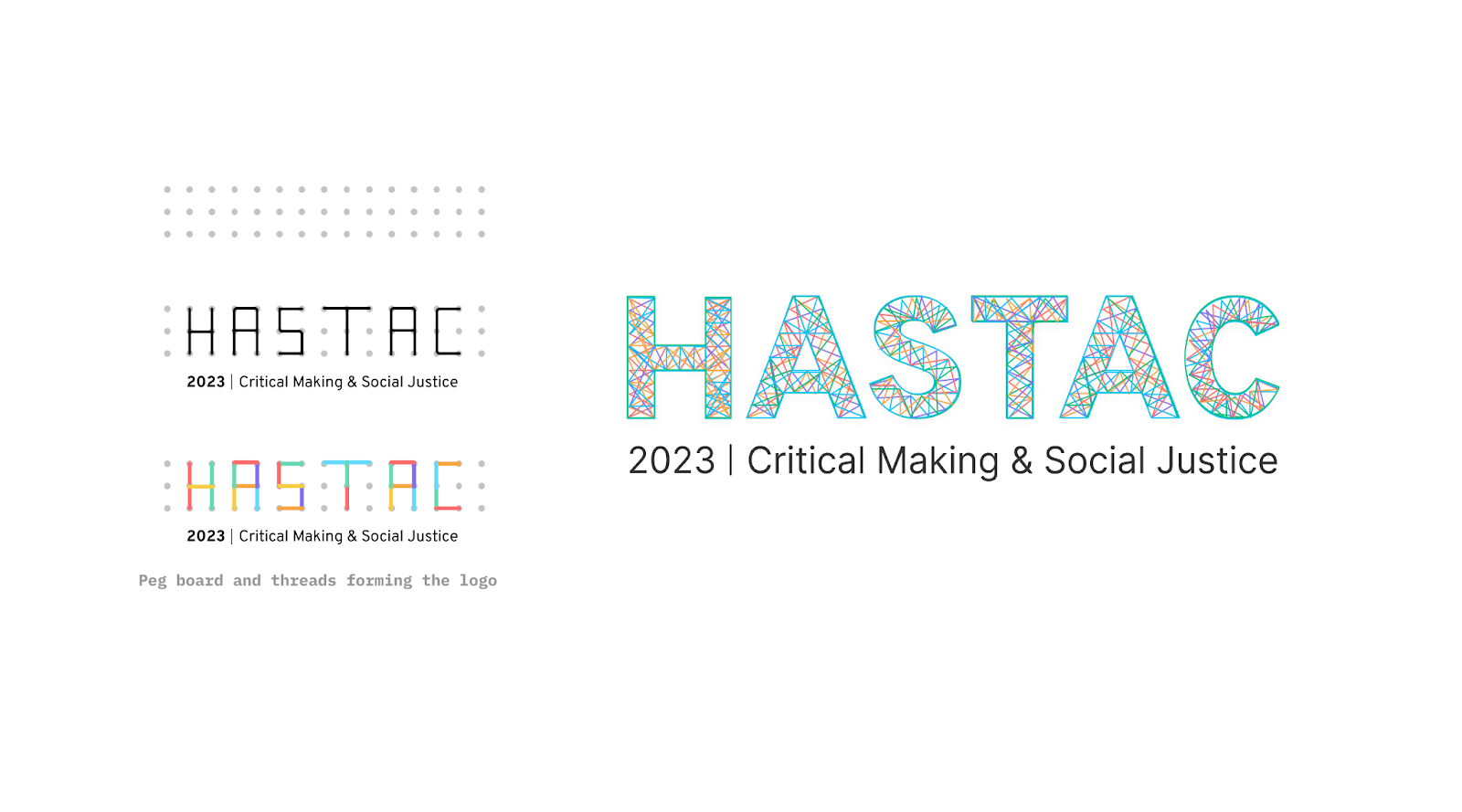 The initial exploration (left) vs the high fidelity logotype (right) 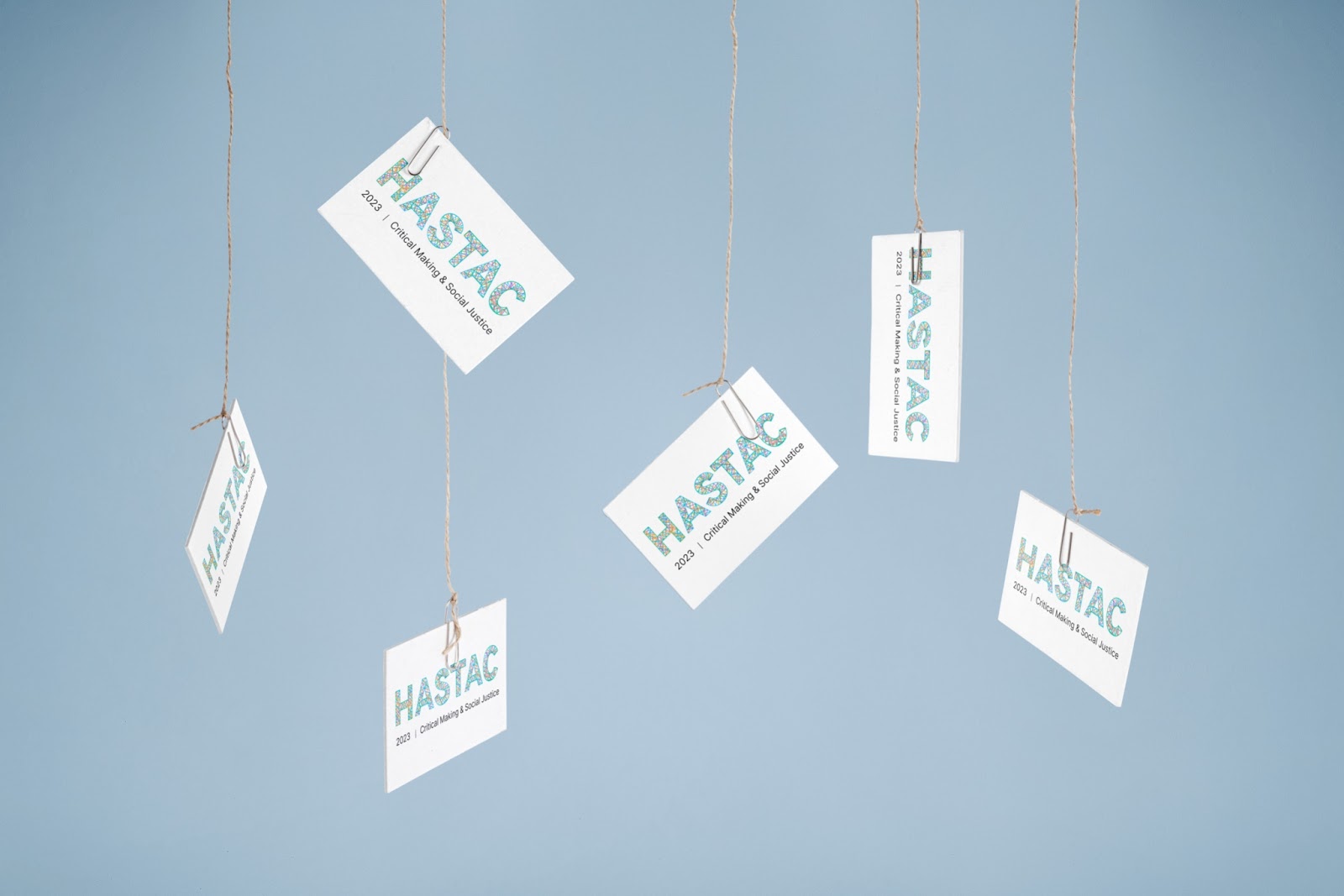 As we spend an increasing time in front of our screens the greater is the longing for the tangible materiality of objects and taking the time to pause and understand the process behind creating something. Through this project, I was able to immerse myself in the process of creation and that is something that I really enjoyed. From an initial exploration of a breadth of concepts to creating a logo mark enriched by the feedback and stories of the various people involved in this project, this was truly a learning experience.

Video & Animation, Visual Arts & Design
This site is part of the HASTAC network on Humanities Commons. Explore other sites on this network or register to build your own.
Terms of ServicePrivacy PolicyGuidelines for Participation