What is a madwoman? My simple definition is that it is made up of the two words “mad” and “woman”. Both terms open up a variety of meanings depending on language/culture, societal norms, and beliefs. I will attempt to give my definitions for these terms within the scope of my project in as concise terms as possible. The term “woman” to me represents any person that identifies as female, was socialized as female and/or has female characteristics. Being a “woman” has all sorts of political and biological characteristics attached to it, so I mean “woman” broadly for anyone who has felt repressed and oppressed by patriarchy.

The word “mad” or “madness”  has many definitions. The Oxford English dictionary has several with usage going back 1275. Some of those definitions include:

“Of a person: insane, crazy; mentally unbalanced or deranged; subject to delusions or hallucinations; (in later use esp.) psychotic”

“Of a person, action, disposition, etc.: uncontrolled by reason or judgement; foolish, unwise”

“Of an animal: abnormally aggressive…”

“beside oneself with anger; moved to uncontrollable rage; furious”

These are the definitions that I am referring to when I discuss madness. Being mad is polysemous with being out of control. Looking at these definitions the meaning and usage of mad have changed some, however, the notion of madness as “abnormal” or deviating from societal expectations has not. Taking that general idea of madness and adding it to the misogynistic practices of discrediting powerful women a connection emerges. A madwoman is a woman society deems out of control, an abnormal woman who has deviated from proper tradition and expectations.

There are two kinds of ‘mad’women that I will examine over the course of this project. The first is the most common and studied, the insane madwoman. In literature, these characters are most often villainous characters. Something snapped within her psyche that caused her to lose all grasp on societal niceties. She is now a broken, defective woman. These insane women, these madwomen are to be shut away and locked up. Being literary characters allows them to be played with and interpreted which, mostly in the postmodern period, has led these characters to be read through a feminist lens. Historically, women did go mad as well. Their stories are more unpleasant and repressive than their literary counterparts. It is difficult to get accurate statistics as there were many institutions both public and private that kept records very differently. I do want to recognize some of the most popular reasons a woman was admitted to an asylum. In a report from the Jacksonville asylum, some of the reasons women were admitted include “domestic trouble”, “religious excitement”, “disappointed love”, “over exertion”, “hard study”, and “novel reading” (see image below) 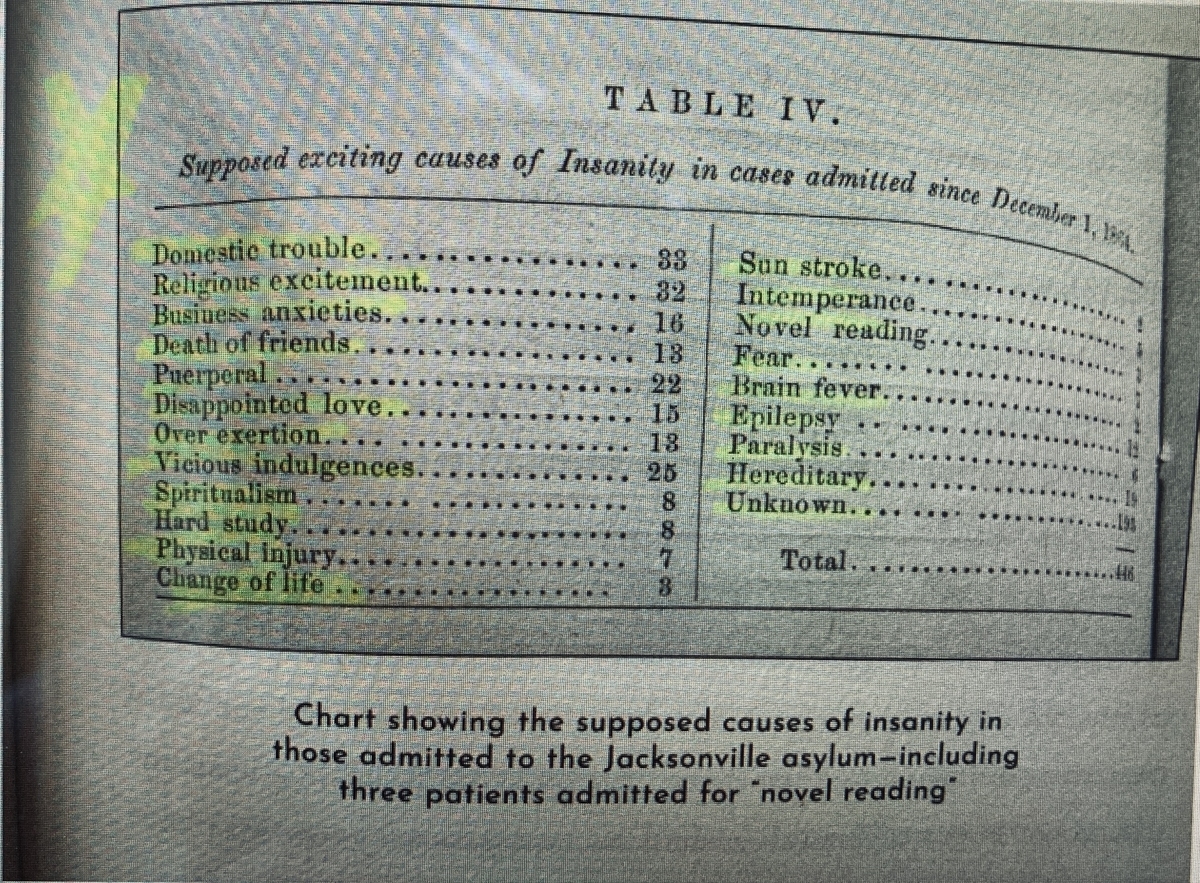 Women go mad because patriarchal society is so stifling, so controlling of all aspects of life, and it is utterly maddening trying to fit into all their boxes. The madwoman had her heyday across much of 19th-century literature, but she is very much still around.

The second definition of a madwoman is the angry type of madness. The best explanation for these women is the example of a woman who loses control of her emotions and lets out an angry outburst. It does not matter the cause of her anger, but the typical response (based on Western social norms) is to deem her reaction as immature, unprofessional, or unhinged. These madwomen are shamed for their anger and aggression which in men is often seen as a characteristic of testosterone. Female anger has been in the process of being reclaimed as feminist rage used to advocate for societal shifts. In their brief analysis of the regulation of female anger, feminist theorists Shani Orgada and Rosalind Gillb argue that even in the wake of events like #MeToo, female anger is still being mediated by the media. They use an example of Uma Thurman’s portrayal by the media in the wake of her accusations against Harvey Weinstein; moving from her own posts to a described “zen outlook” by the New York Times. What they argue is that Thurman is clearly angry, but the media keeps playing back into the tropes of the calm and composed woman. Orgada and Gillb end their article with this, “our analysis acts as an important reminder that even when unleashed, this anger continues to be carefully regulated so as not to exceed the “safe” level allowed by a patriarchal system (“Safety valves for mediated female rage in the #MeToo era” 601). I believe that is the crux of male-defined femaleness: not exceeding the status quo, not being too much.

No matter which definition is used, madness is subjective and is depicted and lived in a variety of forms. One consistency, though, is the source of the madness: domineering patriarchs dictating how a woman is to exist. Whether the reaction to oppression is insanity or anger, the madwoman’s message is clear: she is tired of being held back, enclosed, and censored. Her stories deserve to be told in their entirety and we all need to listen. Through my thesis project I hope to help get these stories out while advocating for change.

Digital Humanities, Literature & Language
This site is part of the HASTAC network on Humanities Commons. Explore other sites on this network or register to build your own.
Terms of ServicePrivacy PolicyGuidelines for Participation